We arrived early at the Institute to turn in our final registration papers.   We were the only ones in the lobby, and Prashant Iyengar was sitting at the desk.  The desk where Mr. Iyengar would sit in order for students to greet him.  The desk where two years ago I got to have a short conversation with Geeta. 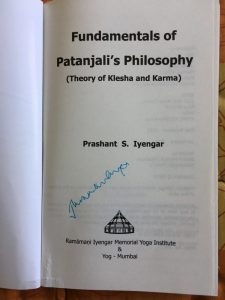 We greeted Prashant with Namaskar and then went into the store.  I purchased a couple of books, one -by Prashant.  The store manager told me, take the book to Prashant, he will sign it.  He gave me his best pen and I approached Prashant.  He asked where I was from and I told him Portland Oregon.  I told him I appreciated his teaching greatly, and he said ok, ok.  It was a touching yet slightly awkward encounter.

In Sunita’s class, Priyanka and I were in the second row, slightly off from the center of the stage.   Throughout the class, we both caught Sunita’s eye.   At one point, she stopped the class and asked both of us if we understood English!   We nodded our heads yes.  She then gave us a lecture about knowing which foot is the right foot and which is the left.  Apparently we had not caught her instruction quick enough to look at the left foot and we were both still looking at the right.  After class I told Priyanka that I thought I was the cause of the right/left lecture, and Priyanka said she thought she was!   It was both humbling and funny.

Sunita’s class focused on the basics with excellent, succinct instructions.  Even though we did basic poses, I was shaky and tired at the end.  The sequence is below.

Today was a very interesting day.

Priyanka and I have made friends with Janet Lilly.  I had met Janet briefly once before, but for the past three days we have set up by each other in the practice hall giving us time to get to know each other.  Janet is a lovely person.

It is always fun to watch what people are doing in the practice hall.  I learn a lot!

This afternoon we were invited to a talk by Abhijata – “just for the foreigners”.   The topic was not disclosed ahead of time.  It turned out to be part stories about Mr. Iyengar and surprisingly, part Abhijata (and Raya) asking for our input about coming to study at the Institute.  Abhi wanted to know who had felt fear at coming to study at the Institute and the source of that fear.  She wanted to know if we were afraid to ask questions in class.  She wanted to know if a month of study was the right amount of time and what topics we were interested in hearing about in future lectures.  It was a heartwarming and light hearted session.  Pandu even came up and told some stories about Guruji.

After Raya’s class I slept long and well.  This morning we went to a 7am class with Rajlaxmi. Rajlaxmi is a wonderful person and a very practical teacher.  My arms were tired from last night class, and Rajlaxmi did not give a rest to the arms either!  We started with abdominal poses and then proceeded to standing poses and ended with inversions.  We started with an emphasis on the feet and Rajlaxmi told us to go look at the photo of Mr. Iyengar’s feet that was taken from underneath a glass table.  The photo shows the balance in Mr. Iyengar feet, it was a remarkable photo.

While sitting on the benches outside the Institute we met Darrin from Denver and Ela from Australia.  Both were friendly and interesting to meet.  Ela had been observing the class and she told me she had the privilege of seeing the backs of my legs in poses.  She said the back of my legs were very educational!  I took that as a compliment. 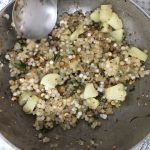 At lunch our cook made us Sabudana, a Maharashtrian dish.  It consists of tapioca ball, roasted fresh peanuts and potatoes. It was quite good!  I was a little skeptical when I saw the tapioca balls.   They did not look like food. 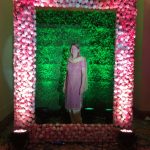 I get a longer rest this afternoon, and then off to Gulnaaz’s son’s wedding reception tonight!  I am excited to be invited.  Bill from Ashland accompanied me to the wedding reception. It was opulent.   Beautiful lighting, flower and wall sculptures.  The bride and groom were radiant and I loved seeing the colorful saris and dress worn by the women.  Gulnaaz gave me a wonderful hug when we went up to congratulate the bride and groom.  It was an honor to be invited.

I woke up with a cold after the wedding.   Luckily, Sunita’s class while challenging was not 60 minutes of standing poses.   Sunita spoke about how every basic pose has an advanced stage.  She asked us questions and imparted wisdom to us.

In particular was this work: Place a brick the narrow way between the upper thighs. Move the front inner thigh to back inner thigh.  This broadens the back thigh.  Lift the brick up.  Then go to Uttanasana

2nd attempt:  place the brick between the inner knees, feet together.  Bend the knees slightly and go to Uttanasana. To straighten the leg, pull the block up with the inner knees.   Then carefully come to Tadasana maintain the knee action.  What does the knee tell you?

Take the brick out from the back side to maintain what has been created.

The institute is closed on Sundays, so the day is more relaxed. 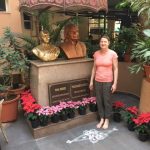 Priyanka and I decided to take a beginning class from Amit Pawar a long-time student of Mr. Iyengar.  He runs Prana-HYC about a 7 minute rickshaw ride from our flat. Prana-HYC was in a “fancy” 10 story building.   It was on the 7th floor and had a wonderful view of the Mula River.  The yoga room was airy and spacious and had a ton of props.

The class was small, only about 7 people including Priyanka and me.  Amit’s style was calm and informative and it was clear he had in-depth knowledge.  There were no demonstrations and the poses were held for long periods.

After Priyanka and I wrote our notes we decided to walk to Vaishaly for lunch.  It was a 25 minute walk and then a 40 minute wait to get seated.  The host asked if we would mind sitting with two other women.  We said yes to this proposal and met two lovely young women who were from Mumbai.  We have lively conversation and good food.   They had never heard of Iyengar Yoga.

We walked to Natural Ice Cream to get some mango ice cream.  It is our new obsession!  Then a 35 minute walk home.  We were very tired because it had become quite hot.

Prashant’s class was illuminating as always   Instead of a sequence I will once again write about the philosophical themes he presented.

LOY was not Guruji’s magnum opus. The book was for the market, “a good book is better than a bad teacher”.  Guruji was courageous and would try different things.   Guruji, when practicing alone, would do Sirsasana after Sarvangasana.

In the afternoon, I watched the remedial class.   For the first time I got to assist a little bit.   Observing this class is watching controlled chaos.  It is hard to know what each person’s issue is, but I tried doing a bit of detective work by watching individual sequences unfold.  I found that my training with Manouso was very helpful in allowing me to make an educated guess as to the issue being treated.

My cold is almost gone, just a bit of coughing left.

7am class with Prashant this morning once again had many interwoven themes.  I found today’s class moving and full of beauty, even though at times it was hard to focus.   The poses we were doing are not important, but the ideas Prashant offered were.

First, he gave the analogy of speed while traveling.  When traveling slow one does not need to look ahead, one can even just look down and walk.  When traveling fast, one must look much further and anticipate.   In yoga, we should not only be doing poses for next moment and todays’ maladies, we should be looking forward and practicing the poses for what might come.

For example, he told us to think we might experience hardness or obstinacy in the future.  How could be practice to prepare for that?  How could we practice to develop the warrior mindset for when it might be needed?

Then we were to work on sensitivity.  He told us we should be the DOS – Director of Sensitivity in our practice.   How could we practice for times when we needed more sensitivity, more love? 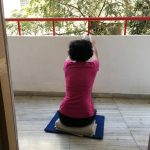 The next theme was touching to me.   He said that both a wise teacher and an ardent student reside in each of us.   We should bring them together, teacher and student when we practice.

After our morning practice, Priyanka and I did a little bird watching from our patio.

Lunch today was stuffed baby eggplant.  It was delicious!